SEA CHAT #30: Under the Shadow of Merapi: Merapi’s Eruption Mitigation in the Late Colonial Era 1930-1940’s & Migration and Identity Negotiation Among Youth in Southeast Asia: Coming of Age Phenomenon 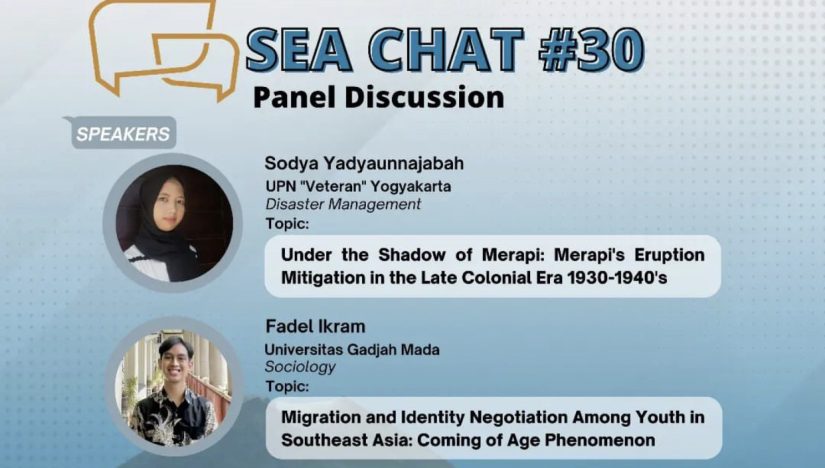 The Center for Southeast Asian Social Studies Universitas Gadjah Mada held a panel discussion entitled SEA CHAT #30 which was held on August 29, 2022. In general, CESASS UGM has concerns about social, economic, political, and cultural issues in the Southeast Asian region as stated in the panel discussion. this. At SEA CHAT #30, the speakers will be delivered by Sodya Yadyaunnajabah from UPN “Veteran Yogyakarta” a Disaster Management student, and in the second session by Fadel Ikram from Gadjah Mada University, a Sociology student.

In the first session of SEA CHAT #30, Sodya presented a topic entitled “Under the Shadow of Merapi: Merapi’s Eruption Mitigation in the Late Colonial Era 1930-the 1940s”. The discussion related to this eruption started from concerns about the potential threat of Indonesia to disasters, especially from mountain eruptions, within the scope of research on the eruption of Mount Merapi in 1930-1940. In this discussion, Sodya presented how the community could handle disasters both from the organization and the government in responding to the eruption of Mount Merapi in 1930-1940. During the Dutch colonial period from 1905-1922, the Dutch government had several agencies to handle disaster management. The realization of this disaster management agency also varies from the construction of monitoring towers to mapping areas with high disaster potential. The Dutch government also formed policies to deal with eruptions, especially Mount Merapi during his tenure.

Then in the second session of SEA CHAT #30, Fadel presented a topic entitled “Migration and Identity Negotiation Among LGBTQIA+ in Southeast Asia Coming of Age Phenomenon”. Fadel started with how internal migration amongst youth makes up the largest flow of people in most developing countries and is closely related to the unequal distribution of development and the preparation for adulthood e.g education, work, marriage, etc. Moreover, with the development of technology, future youth are predicted to be more mobile than ever. Migration itself, is oftentimes regarded as part of the rite of passage for youth in many parts of Southeast Asia before marriage. In the Indonesian context, there is an emphasis on migrating or “merantau” to find more experiences, and in the Southeast Asia context, it’s very common. Youth is a very crucial period in the transition and formation to adulthood, in the context of migration, this period of migration is very important in the formation and exploration of identity. During this period of migration, youth tend to be freer from parental supervision, traditional family norms, and connections to their hometowns which make this migration period a place to exercise individual agency. Aside from being one of the driving factors, sexuality and identity are also regarded as important aspects in terms of the integration and incorporation of youth into the ‘new society’ during migration. In Southeast Asia, no country allows legal union or marriage for LGBTQIA+ people, because it can be said that the rights of the LGBTQIA+ community are very lacking. Each country in Southeast Asia has a different perception and level of tolerance towards the LGBTQIA+ community, which would be pivotal in determining and shaping the experience of LGBTQIA+ youth migration. Then, this panel discussion was closed with a discussion between the presenters and participants.