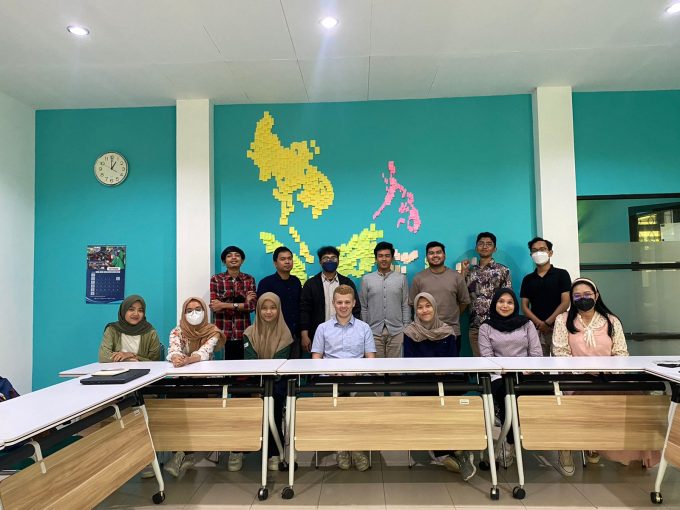 Zac opened his presentation by explaining about Australia’s political system which is a combination of British Westminster and the United States of America’s influence. In addition, sharing a fun fact about Australian political culture, Zac also mentioned about “Democratic Snags” or “Democratic Sausages,” a sausage wrapped in a slice of bread that later will be given to every voter across Australia when it comes to national election day.

Then, Zac talked about monarchy power in Australia, especially how the British widely influence Australia by having a representative of the king or queen that may cancel laws or dismiss the prime minister. He mentioned the case of the dismissal of Gough Whitlam that was very popular for his supportive action toward Indonesia during his years as Australia’s Prime Minister. Whitlam was dismissed by the Governor-General because of an ongoing parliamentary breakdowns and several scandals. Zac later added that this case highlights the power of monarchy as legal power even though it is rarely being used.

Zac also served data about public opinion on the discourse of republic which shows that there are a lot of Australian supporting republic. However, a high level of apathy and monarchy influence in Australia hinders this discourse to be in advance discussion in the Australian government. The death of Queen Elizabeth II started to question Australians whether Australia felt more or less connected to monarchy and Zac added that maybe Ausralians want to move on and start a new chapter since they lost the queen.

To close his sharing session about related topic, Zac explained about the Commonwealth, a way of Britain and its colonized countries to work together and engage in diplomacy. When being asked by the audience about the influence to other monarchy countries of the Commonwealth if Australia finally became a republic, Zac said that New Zealand will probably accept the idea of republic as well since Australia and New Zealand’s relation is likened to ‘big brother’ and ‘little brother.’

The whole sharing session was wrapped with a discussion session between the presenter and the audiences. During this session, Zac shared about Aborigines ethnic’s position in current Australian politics. He said that the vast majority of them are against the monarchy since it is a constant reminder of colonization. Today, Aborigines are being given a right to vote and they have an Aborigines politician.