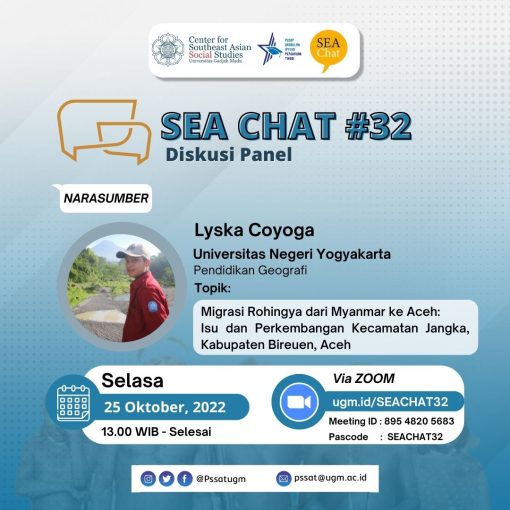 Coyoga started his presentation by asking why the Rohingya choose to refugees themselves to Aceh. Two audiences respond to the question because Aceh is well-known as “Serambi Mekah” and another response is figuring out the geographical location that is relatively accessible by using a boat or other vehicle that they have a narrow option to do.

Before revealing the answer from the former question, Coyoga presents to the audience who is actually the Rohingya, which he explains that they are an ethnic group who settled in Rakhine State, Myanmar near to Bangladesh from the 7th century and later knowingly as Rohingya in the 18th century after a British researcher named them. After the military coup d’etat  in 1962, the Operation of King Dragon (Nagamin Operation) was held and implicated the Rohigya people refugees themselves out of Myanmar and later classified as Bengali people in Myanmar administration census in 2014. In brief, there is an exclusion towards the existence of Rohingya people in Myanmar structurally.

Since 2009-2022, Coyoga presents that an estimated 1,800 Rohingya people had been landed in Aceh by entering the northern part of the province to seek a place. There was a time when local people had a concern towards the Rohingya refugees because the refugees chose to escape from the camp and settled in some public facility such as a musala (prayer room) before finally being relocated to the more sufficient place.

There was also a concern in local people who feel socially envious with the presented assistance for the refugees. In conclusion as well, Coyoga also presents that in the future, the people of Aceh are likely to remain open to the refugees since they believe that the ill-fated may happen to everyone then it’s important to keep the solidarity towards the unluckily one. Besides, there is a local cultural trait named Peumulia Jamee which means treating the guests or outsiders well.

Before this chat edition ended, there was a question and answer session which involved many interesting discourse such as how the Indonesia government as well as the Aceh Province government handled the increasing number of refugees as well as discussing the status of Indonesia as the third party country for the refugees issue. It’s also noting to develop the research relating to the role of local traits Peumulia Jamee in Aceh’s refugee issue.