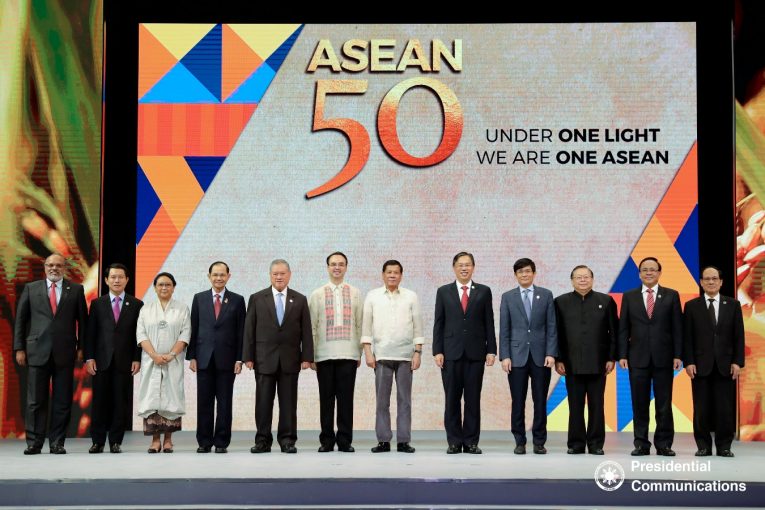 Training was conducted by PSSAT, with a focus on the progress of Southeast Asia, and relevant future movements. Professor Muhtar Mas’ud spoke about rediscovering the meaning of the ASEAN Economic Community (AEC). According to Prof. Muhtar Mas’ud (MEA), that masyarakat is different from the komunitas. in English masyarakat is society; and komunitas is community. In the field of sociology, it is related to the meaning of the relationship of the two words. In society, relationships are built on the basis of needs and can change. While in the community, the relationship is more emotional. Relationships built on the basis of closeness such as familial relationships, relationships because of one clan, etc. In this connection, membership can not be changed and in and out. Mas’ud later said that Indonesia then considers the Economic ASEAN Community to be an ASEAN Economic Community (MEA) not as a Community of ASEAN Economic Community (KEA). If by community, this means that one member will not harm other members. This means there will be no suspicion. But in fact, the affairs of trust among countries in Southeast Asia is still very low between one and the other.

When considering the notion of community, there are three conditions which must be met. Firstly, there must be shared values and expectations. Communities will have a set of values, and these values must be shared between one state and another. These values can be very similar, or they may be completely different. For example, in Myanmar, hitting a child is common. However, in Indonesia, the same action is considered to be violence against children.  Values are something that every member in the community must understand. Secondly, is the skills and communication process (Capabilities and communication process). Essentially, a community is communal. To achieve a ‘communal society’, communication is essential. Communication between countries should take place, so that a communal society can be established. Thirdly, there must be cultural attachment, or a mutual predictability of behavior. To achieve this, suspicion should be eliminated. A communal community will not be formed if there is suspicion present amongst members. Currently, Indonesia is suspicious of the State of Singapore and Malaysia over the control of the economy in the region. If this continues, it is unlikely a strong community will be formed.

The concept of community also relies upon direct interaction. This can assist in building the aforementioned emotional relationships. This can take the form of physical connectivity, institution connectivity, and resource mobilization. The relationship itself can also be seen from various perspectives. The Asian socio-economic community has the advantage of being personal. It may also be based on the perspective of national interest. People feel the need to connect with other people from the Southeast Asian region because, for example, the Indonesian government has agreed on a merger in the community. So therefore, the Indonesian government will be open to connecting with other ASEAN members. This relationship will consider how the community can affect Indonesia as a state. There is also a relationship created by the existence of religious ties. However, the emphasis here is the perspective of humanity. This relationship is cosmopolitanism, plus communitarianism, which means attachment to the ‘cosmo’ and also the ‘local community’. This bond is seen as a moral democracy of regionalization that can connect countries in Southeast Asia.

Life, livelihood, and style, are three factors which may assist in discovering the identity of a region. Life and livelihood will be closely related to people’s lives in the region. For example, the culture of eating rice can be a strong point of identity, as rice is a staple food for many countries within the region. Furthermore, Ramanya dance may also be seen as a point of shared identification, as every country has art which is connected with dance. Furthermore, style pertains to what trends arise in the region. In most ASEAN countries today, both adults and youth are addicted to gadgets and the internet. According to Professor Muhtaar Mas’ud, this can be a lifestyle that may be a point of identity for the region.

The birth of the ASEAN Economic Community was based upon an emotional connection of nations. Members of the State have a strong emotional connection, which is exemplified through the life and lifestyles that develop. If Indonesia wants to contribute and build upon the ASEAN Economic Community, it must build a strong, trusting relationship with other states. This can certainly be built on human morals, in order to create a community which utilizes local values as a point of identification

This article was written by Ade Nuriadin, researcher at the Center for Southeast Asian Social Studies (CESASS).