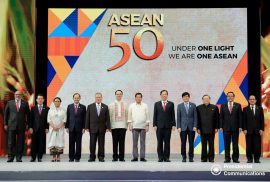 Training was conducted by PSSAT, with a focus on the progress of Southeast Asia, and relevant future movements. Professor Muhtar Mas’ud spoke about rediscovering the meaning of the ASEAN Economic Community (AEC). According to Prof. Muhtar Mas’ud (MEA), that masyarakat is different from the komunitas. in English masyarakat is society; and komunitas is community. In the field of sociology, it is related to the meaning of the relationship of the two words. In society, relationships are built on the basis of needs and can change. While in the community, the relationship is more emotional. Relationships built on the basis of closeness such as familial relationships, relationships because of one clan, etc. In this connection, membership can not be changed and in and out. Mas’ud later said that Indonesia then considers the Economic ASEAN Community to be an ASEAN Economic Community (MEA) not as a Community of ASEAN Economic Community (KEA). If by community, this means that one member will not harm other members. This means there will be no suspicion. But in fact, the affairs of trust among countries in Southeast Asia is still very low between one and the other. read more