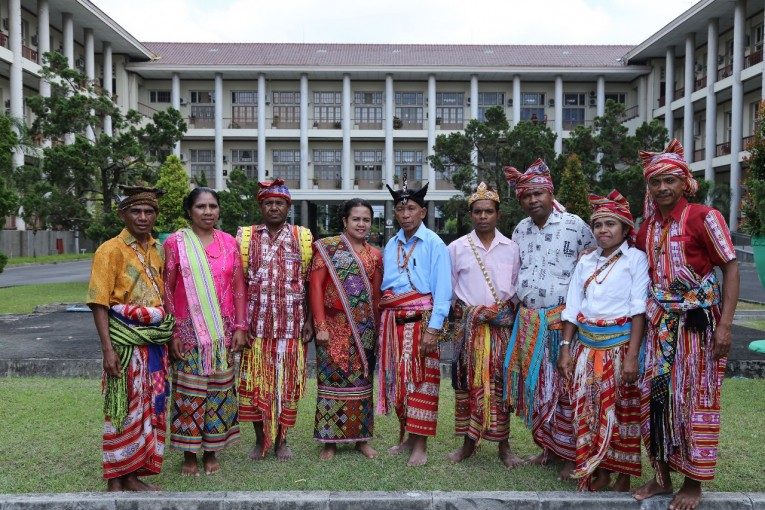 As a response to the influence of modernization and the numerous agrarian conflicts that are affecting indigenous people in Indonesia, more and more villages are conducting community-based activities, one of those is Mollo village in East Nusa Tenggara. On 20th-23rd September 2017 the Center for Southeast Asian Social Studies (CESASS) of Gadjah Mada University had the opportunity to host representatives from six villages (Ajaobaki, Fatukoto, Fatumnasi, Lelobatan, Nefokoko and Tune) that have joined to form the Apanola Atolan Pah Mollo (AAPM) or Pelestari Adat Mollo. The village representatives are conducting a comparative study in villages in Yogyakarta Region, among others, in Nglanggeran, Gunung Kidul District , Dlingo in Bantul District as well as in Pulesari Sleman District.

Beside conducting comparative study in villages, AAPM is also learning how to promote Sekolah Budaya (Cultural School) that was firstly developed from Mollo’s community. The need to create a Sekolah Budaya derived from the concern for the role of adat in the opposition of Mollo community against the marble mining that has been carried out from the 90’s to the 2000’s in the village. The upheaval that affected Mollo community triggered the concern about adat and its important role in unifying the community in the opposition against marble mining. Since adat has been greatly affected by the influence of modern life, especially among the new generations, Sekolah Budaya was created as a tool to strengthen and preserve adat in Mollo.

Before visiting villages in Yogyakarta, the village representatives took part in a workshop regarding communication for building mutual understanding and joint ownership of Sekolah Budaya in villages.

Dr.phil. Hermin Indah Wahyun, head of the Center for Southeast Asian Social Studies (CESASS), hosted the workshop. The members of the AAPM group also visited Gadjah Mada University (UGM) and met UGM Rector, Prof. Dr. Panut Mulyono, M.Eng.D.Eng. was accompanied by officials og UGM entourage. The visit to UGM was aimed to spread information regarding the activities of Sekolah Budaya of six AAPM villages that have been supported and accompanied from CaRED UGM research team since 2015. Muhadi Sugiono, MA, head of the CaRED UGM research team, hopes that this comparative study, by involving key actors that work for the implementation of the Sekolah Budaya in Mollo, will have a positive impact on the implementation of the Sekolah Budaya in other villages.

The News and the photo were adapted from Pena Nusantara (http://www.penanusantara.com/wakil-enam-desa-penyelengara-sekolah-budaya-studi-banding-ke-yogyakarta/)