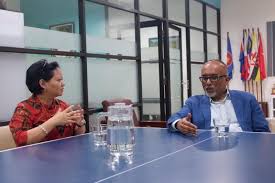 Just as the rain stopped, Prof. Cherian George, a professor in the Communication Department in Hong Kong Baptist University, stepped into the office of Centre for Southeast Asian Social Studies (CESASS) Universitas Gadjah Mada (23/11/2017). This visit of a Singaporean Professor in Yogyakarta was as a speaker at the International Seminar on Social and Political Science (ISSOCP) 2017 which is part of the celebration of the 62nd Anniversary of Faculty of Social and Political Sciences (FISIPOL) Universitas Gadjah Mada at University Club UGM on the 23rd-24th November 2017.

Director of CESASS, Dr.phil. Hermin Indah Wahyuni welcomed Prof. Cherian and introduced about CESASS as an institution and the cooperation conducted with other universities in Southeast Asia. Furthermore, an academic that has just released a book titled ‘Hate Spin: The Manufacture of Religion Offence and Its Threat to Democracy (MIT Press 2016), here the talk with the research staff of CESASS concentrated on the recent issues about hate speech in social media to the issue of the aspect of social-culture in the Southeast Asian region, such as the differences and characteristics of the migrant worker in Indonesia and Singapore.

The leisurely talk took place for around 2 hours, Prof. Cherian shared his views on various issues of political identity and regret the role of the media which has triggered segregation and horizontal conflicts through the spreading of fake news and hoax that has happened in the United States and Indonesia. He considered that these issues could spread to the strengthening of religious fundamentalism and supremacy of certain race or ethnic with hidden political and economic agenda that consequently puts the minority at a disadvantage. (Meike/Dipka)