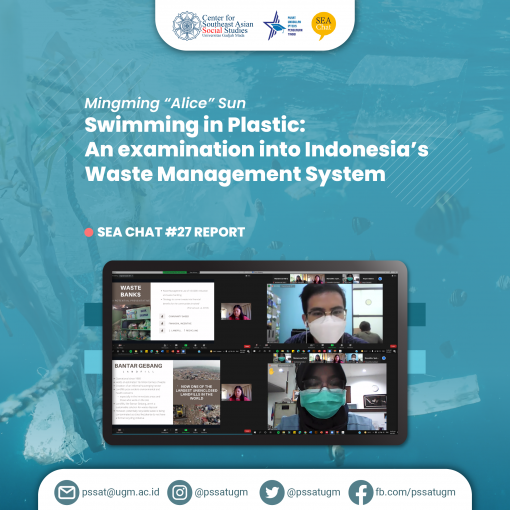 As the global waste is expected to grow to 3.40 billion tonnes by the same year, the waste management system becomes the most concerning issue especially in Indonesia that is already struggling to deal with the current waste levels. The Center for Southeast Asian Studies (CESASS) of Gadjah Mada University (UGM) on Monday (06-09-2021) held SEA CHAT #27 with the topic of “Swimming in Plastic: An Examination into Indonesia’s Waste Management System”. The discussion was conducted by Mingming Alice Sun, 2nd year BA: Political Science and International Relations & Anthropology and Sociology from the University of Western Australia.

In this discussion, Alice focuses on combating some issues such as landfills, waste banks, and the impact of globalization which heavily contribute to waste management issues. The large quantities of waste that we now see are largely a by-product of human activities. Well waste management and its associated problems are a global issue that affects the social-economic countries. A combination of local resources including infrastructure in Southeast Asia makes struggle on how to disposing of that waste. There are preventive actions such as the 3R reuse, reduction, and recycle. It is imperative to acknowledge that sometimes this can be out of reach and other solutions have to be made to safely store what kind of potentially toxic waste to implement a decent waste management system.

The discussion then continued with the example of improper waste disposal in the Citarum River. It becomes one of the polluted rivers in the world with nearly 3,000 industries try to waste in this stream while many people rely on this river to irrigate and provide a water supply. This condition makes a high level of slow degradation, increasing the potential of landslides and micro plastics detected, and the issues on the water quality bring some health implications. The president of Indonesia, Joko Widodo, has successfully created an idealistic to make the river water drinkable through the implementation of the cleanup project. Then this project has been replicated into the other heavily polluted water rise. Another example brought by Alice was the Bantar Gebang Landfill, which is used by the government to steal the waste and placed it in the designated area. These solutions are relatively easy and also relatively cheap. These landfills now pose evident environmental and health concerns.

Like many of the Southeast Asian countries, Indonesia has adopted a similar approach to sustainable waste management systems through the Waste Management Law of 18/2008: reduction and waste handling. This increases waste banks in Indonesia that have the initiative to increase awareness and understanding of waste levels and ultimately a strategy to convert waste into financial benefits for the communities involved. It is important to acknowledge that waste banks come from different points, preventing and solutions. The grass-roots initiative called “Bye-bye Plastic Bag” was founded by Melati and Isabel Wijsen in 2013 to advocating for the clean-up of their home island of Bali. The campaign then was picked up by local media and granted an audience with the Governor of Bali.

Alice continued the presentation with the export of waste abroad and she concludes with a quote “The question is on us, how do we consume less in a society which is reliant on consumption and while we can reuse and recycle the ultimate solution for preventing overwhelmed waste management system. Industries need to be responsible for the waste they created and it is also up to us to make sure we recycle and we prevent as much waste from being free into landfill”.