SEA CHAT #29: Indigenous People in Regional Institution: A Comparative Perspective between ASEAN and the Arctic Council 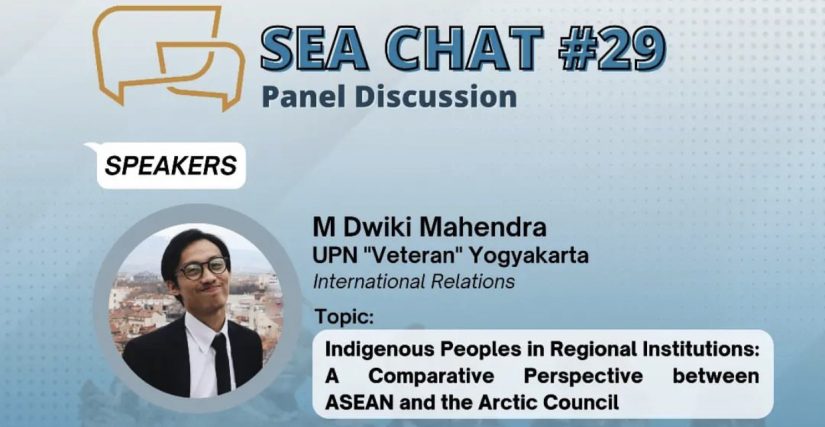 On Friday (26/08), the Center for Southeast Asian Social Studies Universitas Gadjah Mada (CESASS UGM) held the Southeast Asian Chat (SEA CHAT). This is the 29th SEA CHAT after several months of this agenda being postponed due to the pandemic. This agenda is a routine agenda organized by CESASS UGM to discuss countries in Southeast Asia and social, political, economic and cultural issues. The presentation of the discussion material was carried out by M Dwiki Mahendra, an International Relationship student in Universitas Pembangunan Nasional “Veteran” Yogyakarta and also an intern in CESASS UGM.

In this SEA CHAT session, Dwiki as a speaker presented his research about “Indigenous Peoples in Regional Institutions: “A Comparative Perspective between ASEAN and the Arctic Council”. Within the framework of ASEAN, as the regional organization of Southeast Asia, Dwiki said that there is no explicit reference made to the indigenous people despite its keen interest in promoting the cultural and ethnic diversity in the Southeast Asia region.

In contrast, the Arctic Council’s Ottawa Declaration was created with the inclusion of Indigenous peoples. Dwiki concluded that the model implemented by the Arctic Council could be used for ASEAN due to the similarity between these institutions.

This class was closed with a question and answer session and a discussion between the interns, presenters, and CESASS UGM staff who joined this opportunity. By holding a research class on the topic of ASEAN issues, it is hoped that the participants can enrich their knowledge and to know more about ASEAN topics.