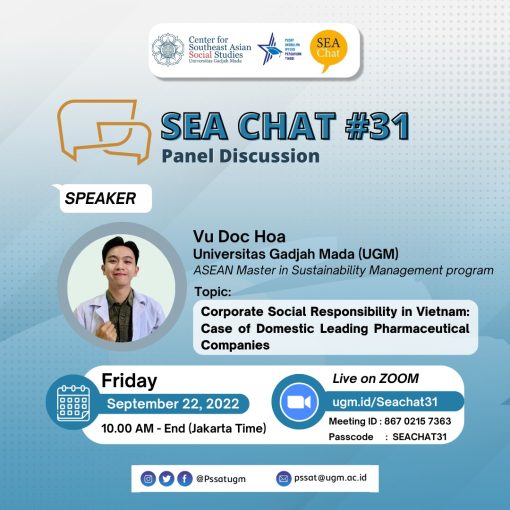 From the economic responsibility pillar, the result shows that these companies have ensured revenue and profits around 588,550,000 net in 2021, also created sustainable jobs with totals of 9,000 employees. Next, Hoa explained his findings that Vietnam has not provided any complete CSR laws to be a solid legal basis, so the company just adopted the laws and taxes related to the environmental area. On the ethical responsibility pillar, 8 companies in Vietnam adopted traditions from three doctrines: Confucianism, Taoism, and Buddhism, because those three are the most popular doctrines in Vietnam. Lastly, the pharmaceutical companies have fulfilled philanthropic responsibility, especially protecting the environment by adopting both Vietnam standards and ISO standards.

At the end of his presentation, Hoa concluded that the implementation of CSR in Vietnam is still in the early stages, considering Vietnam still doesn’t have a specific standard about the CSR laws. Thus, each company used their own way to implement the rules, which led them failing to meet the requirements on CSR. He also proclaims that the companies which don’t pay attention and perform the proper CSR and other social responsibility may lose their access to the market because of the consumers, policy makers, investors, and NGOs’ awareness of this policy.

SEA Chat #31 ended after a question and answer session, which was filled with discussions between speakers and participants about research. CSR as a form of social contribution is one of the mandates that are sometimes forgotten by companies,  especially the fact that there are only few people who really understand CSR and its practices. In fact, companies and factories are giant subjects that often bring harm to the society and the surrounding environment. This discussion is expected to raise awareness and concern for society on the implementation of CSR in the surrounding environment.