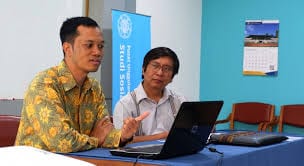 Every human being has the right to a peaceful life and to freedom. Unfortunately, these two rights are becoming something extremely difficult to obtain for Rohingya people in Myanmar. After session 17 of the SEA Talks where the history and background of the Rohingya crisis was discussed, CESASS UGM organised a new discussion on the issue through the SEA Talks 18 : “Rohingya: International Human Rights Law Perspective” .

Eko Riyadi, M.H. from the Center for Human Rights Studies of Islam University of Indonesia (UII), and Muhadi Sugiono, M.A and researcher for CESASS UGM, were invited to join the SEA Talks discussion as speakers. The cooperation between the Center for Human Rights Studies of UII and CESASS UGM represents a positive sign of active participation from the two institutions that both focus their work on academic studies regarding Human Rights in Southeast Asia.

During the discussion, two main problems have been identified as the causes of the persistence of the Rohingya crisis: security issue and citizenship issue. In addition to a complex historical ethnic background, the 1982 Constitution of Myanmar does not recognise the Rohingya ethnicity and do not recognise them as citizens, creating an unsafe and unstable situation in the country.

While analyzing the humanitarian aspect of the crisis, Professor Eko Riyadi stated : “The Rohingya have become one of the ethnicities that have suffered the most in the world because they have been denied access to services such as education, healthcare and other public facilities. This proves that Human Rights violations have been occurring since long time in this military junta country.” The lack of official documents about the population of Myanmar as a legal proof of the real status of the population in the country, produces uncertainty in the future of Rohingya community. A further factor that worsen the conditions of Rohingya is the position taken by Myanmar government that keeps identifying the whole Rohingya community as being involved in separatist movements.

On the other hand, any efforts to involve organisations or to make use of Commitees of Treaty Based Mechanisms have been ineffective in responding to the Rohingya crisis. Several countries and humanitarian organizations have already tried to help the Rohingya community, however no one ever succeeded in making a step forward and prosecute Myanmar government. The reason is that Myanmar government does not recognize or has not ratified yet any of the International Treaties that provide for Treaty Based Bodies and Mechanisms, therefore, it is not possible to investigate Human Rights violations in the country. As a Consequence, it became extremely difficult for the international community to hold Myanmar accountable for its violations of international law.

The UN through the General Assembly and the Security Council (Charter Based Mechanism) can take actions against Myanmar government based on the fact that Myanmar has already ratified the memorandum of understanding.

The UN Human Rights Council has the alternative solution to end the Rohingya crisis. The first possible and most diplomatic solution would be to invite Myanmar government to revise the 1982 constitution in order to officially recognize the Rohingya ethnicity and grant them legal status of citizens. It is extremely important to strive to achieve this solution since the reasons brought by Myanmar government to avoid recognizing Rohingya people as Myanmar’s citizens cannot be considered as acceptable or relevant.

Muhadi added that helping the refugee will not end the crisis permanently since the root causes of the crisis derive from the policies of Myanmar government. On the other hand, it is now the time for ASEAN to take action against this case of crime against humanity by denouncing Myanmar at least making use of sanctions. (Gharin/Ilaria)