Studying about Corruption in Southeast Asia with the ISCP Participant 2017 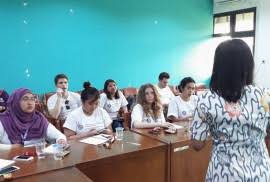 As an effort to study the issue of corruption and the relation with the policy adopted by the government, the Faculty of Psychology, Universitas Gadjah Mada (UGM), in collaboration with the Faculty of Economic and Business, UGM, conducted the International Short Course on Psychology (ISCP) with the theme of “Corruption, Culture, and Moral Psychology: from Research to Policy”. This is the first ISCP held and it included 27 university students from various countries namely; Australia, Ukraine, Philippines, Brunei and many more. One of their agendas was to visit several study centers in UGM to explore corruption from the different aspect of intellectuals through the research and activities done to examine and prevent the issue of corruption. In this fieldwork, the participant was divided into groups of 8 to visit the study centers in UGM.

In this regard, the participant of the ISCP paid a visit to the Centre for Southeast Asian Studies (CESSAS) UGM on Wednesday 25th October 2017, to discuss the issue regarding corruption in Southeast Asia. Their visit was welcomed by CESSAS Research staff, Dr.phil. Vissia Ita Yulianto, whom gave the introduction about CESSAS as an institution. Followed by Ade Nuriadin, M.A. whom is responsible for the SEA Movie program, elaborated on the issue of corruption in Southeast Asia through the short films created, such as RM 10 by Emir Ezwan (Malaysia) and Wrong day by Yusuf Radjamuda (Indonesia). From the films played, the ISCP participants saw how the issue of corruption is correlated to the culture and how the morality embedded within the society can be utilized to prevent corruption.

The discussion regarding corruption was associated with the high level of child marriage issue in Southeast Asian countries, the discussion was facilitated by Meike Lusye Karolus, M.A. as one of the researcher at CESSAS UGM. The child marriage index in Southeast Asian countries needs to be reduced not only through policy changes but the need of a comprehensive socialization regarding healthy reproduction which is crucial for teenagers prone to the conduct of child marriage. The meeting took place for about two hours and was closed with a question and answer sessions which concentrated on how the government responded towards these research findings on formulating policy towards corruption and child marriage. (Meike/Dipka)